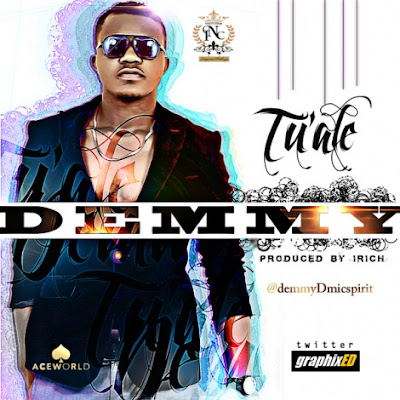 Fresh song from Demmy titled ''Tuale''. He is a dude with a great voice and huge talent. Download the song below and share.

A royal-born breed, Oyebade Ademola who goes by the stage name – Demmy [Da Mic Spirit] a.k.a “omo mummy” as called by his friends is a versatile singer who has been on the music scene since his primary school days.
Demmy is highly inspired by every rhythm around him and by songs from the likes of Bob Marley, Luther Vandrous, Fela Anikulapo Kuti, Michael Jackson, Sikiru Ayinde Barrister, King Sunny Ade, Chief Ebenezer Obey and a whole lot more.

He began exploring the depths of music more on the professional scene while in the University and recorded his first-ever single titled “Padi B4” which featured T.Code on a Samklef-produced instrumental after which he recorded more and was featured on a number of songs which include G-flav’s “Turn My Swag On”, Lawale’s “Woni Baby”, Stage’s “Hustle”, Squad’s “Aye’n Yi Lo”, Snow-Wyte’s “I Dey Mad” and another track by Myro [Alien DNA]. Demmy has worked with ace producers like Cobhams Asuquo, Samklef, Irich, Ben O and also Richmore B.

This strong energetic runway model who is now in charge of a clothing label called “INC [Integrated Clothings]” is ready to set the ball rolling by turning the table around with his new sensational single titled “Tuale”. Drum rolls as we salute the “Ori Ade” himself from a royal breed on the Irich-produced “Tuale” which poises to be an exceptional come-back for this young man.