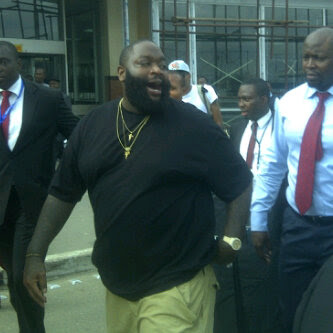 American rapper, Rick Ross, who was threatened with a lawsuit by the Cross River State government for his absence at last year’s edition of the state’s annual Carnival Calabar has played into the hands of the state with his arrival in the country  to headline Summer Jam Fest scheduled to hold at the Eko Hotel and Suites two days ago. Ross should have arrived on Thursday night but arrived mid-day on Friday. Even with that, the police were waiting for him and they moved into action immediately he was confirmed to be in the country. The police action was at the instance of the Cross River State government, which alleges that Ross refused to perform despite paying him $200,000 as agreed.

Reliable source learnt that the efforts of policemen from the Special Fraud Unit (SFU) in Lagos to arrest the rapper affected the commencement of Summer Jam Fest as Ross couldn’t come down from his hotel room.

He was afraid that his arrest would be effected if he did and he would be handed over to the Economic and Financial Crimes Commission (EFCC) based on a petition being acted on by a lawyer for the Cross River State government,one of the key guys Among the Organisers promptly contacted Sen Ita Giwa who put a call to Cross River Governor Sen Imoke who agreed the police should not Arrest him but instead he made an Undertaking Guaranteed by the American Embassy on how he will refund the state 200,000 dollars.

Meanwhile, the rapper has described Nigeria as an oil rich nation with generational wealth saying he has officially joined the ''Oil Money Gang''. He made this known via his twitter handle @rickyrozay 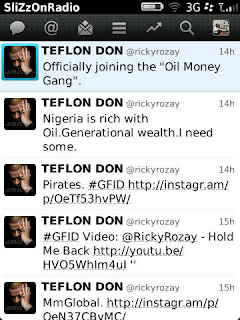